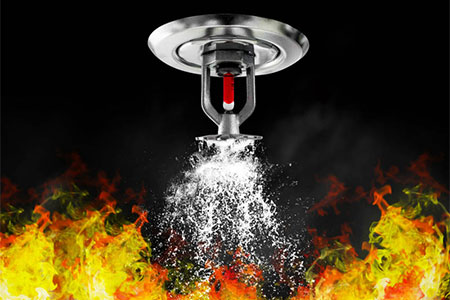 There’s no denying a fire could cause catastrophic damage to your Colorado commercial property. And without a way to put out the flames quickly, some of your employees and customers could be severely injured or killed. That's why having a commercial fire sprinkler system is so important.

According to the National Fire Protection Association (NFPA), when sprinklers are installed, the odds of dying in a fire are lessened by 80 percent and the average property loss due to fire is cut by 50 to 66 percent, compared to fires where sprinklers don’t exist.

While it’s undisputable that sprinklers are a needed line of defense against fires, it’s remarkable how many myths still endure about how sprinklers truly work. So, lets talk about 4 myths surrounding commercial fire sprinkler systems and why they’re wrong.

FACT: Sprinkler systems are more cost-effective when compared to the damage caused by other firefighting efforts. Since sprinklers are able to keep a fire contained within one room rather than letting flames and smoke spread throughout a building, most fire damage clean-up is limited to one area. Additionally, water damage as a result of fire hoses usually costs more to repair. Sprinklers release only 8-24 gallons of water per minute, while fire hoses release 50-125 gallons per minute.

MYTH 2: All Sprinkler Heads Go Off During a Fire

FACT: Sprinkler heads are designed to react to fire temperatures above 155 °F. A temperature-sensitive glass bulb filled with a liquid or metal alloy keeps fire sprinkler heads in place. The glass applies pressure to a pipe cap, preventing water from pouring through the system. So, only sprinkler heads near the fire will activate, leaving unaffected areas dry.

FACT: Although you want your sprinkler system to be sensitive to fires, that doesn’t mean they can be set off by someone burning their lunch or lighting up a cigarette. Only 1 in 16 million sprinkler heads activate accidentally, so their benefits far outweigh any risks.

FACT: Fire sprinkler systems and smoke alarms operate autonomously. Smoke alarms sense smoke particles which causes them to alarm. This is very important, because you want the warning before the fire has spread too far. Sprinkler system heads are only heat activated. The one will not set off the other.

As a business owner, safety is needed to keep your operations running smoothly. To help ensure your Colorado company will be safer from fire damage, it’s a good idea to install commercial sprinklers and mount fire extinguishers throughout your facility.

But if the unexpected does occur, help is nearby. At Cyclone Kleen Up, we’re both fire damage and water damage clean up professionals. We offers 24-Hour Emergency Recovery Services and are committed to getting your business back on its feet as quickly as possible.