Don’t Be a Victim of Carbon Monoxide Poisoning 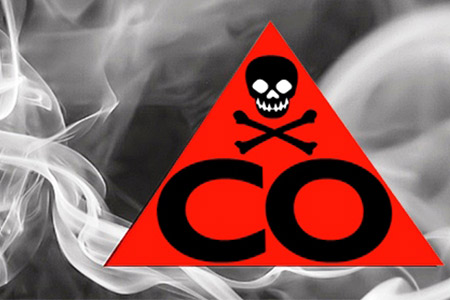 Not very long ago a couple made love in their car that was parked in a garage. They not only left the vehicle running but were also operating a kerosene heater due to the extreme cold. Needless to say, they died due to carbon monoxide (CO) poisoning.

Although that sounds like a sad and silly way to go, every year at least 430 people die in the U.S. from accidental CO poisoning and approximately 50,000 others are forced to visit the emergency room because of it. CO deaths regularly occur in Colorado and the stories are heartbreaking.

The reason why CO is dangerous is because it interferes with the oxygen-carrying capacity of blood. Being colorless, odorless and tasteless, people can be overcome without any warning. Symptoms caused by exposure to CO include low energy, headaches, dizziness, weakness, nausea, vomiting, chest pain, confusion, visual impairment, and (obviously) death.

CO is found in fumes produced by furnaces, kerosene heaters, vehicles “warmed up” in garages, stoves, lanterns, gas ranges, portable generators, or by burning charcoal and wood. CO from these sources can build up in enclosed or partially enclosed spaces, poisoning people and animals.

When a storm knocks out power, many rely on portable generators to keep the lights on until electricity is restored. Fred Henretig, a senior toxicologist at the Poison Control Center at the Children's Hospital of Philadelphia, says he and his colleagues have been attempting to raise awareness about proper portable generator use for years, but carbon monoxide poisoning cases unfailingly surge after each big storm.

"So what people tend to do — not always but it's not unheard of — is just set it up like right next to the open garage door and they think, 'OK, that's going to work fine, it will blow out,' " Henretig explained. "The exhaust will blow out, but the trouble is, you can't always account for different drafts and how things get vented around."

Here are ways you can you protect yourself from CO poisoning, whether a disaster has occurred or not:

If your CO detector goes off during or right after a disaster, leave your residence immediately and call 911. If you feel light-headed, dizzy, or nauseated and suspect you may have CO poisoning, seek immediate medical attention.

If you live in the Central Colorado area and have recently experienced water damage, fire damage, smoke damage, or storm damage, necessitating the use of a generator, call Cyclone Kleen Up immediately! The sooner we can restore your home or business to pre-loss condition, the safer you’ll be.