How to Keep Your Appliances from Going Up in Smoke 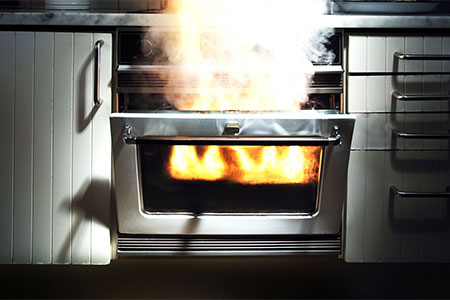 If you’ve ever had your power go out after strong Colorado storm, didn’t it feel as if you had suddenly been thrust back to the dark ages? That’s because homes today are filled with electric lights, appliances and gadgets that make our lives easier and provide us with entertainment. We usually don’t think much about them until they no longer work. But statistics show that we should because appliances do contain a level of danger.

Modern home appliances are safer today than they were a generation ago. Older appliances can pose a fire hazard because they may lack modern safety protections. But new appliances have more electronic bells and whistles than ever before, making it possible that bad wiring or electric components could go bad. But the fact is, most appliance fires are caused by human error. The following are appliances with a history of fires and the actions you can take to have fewer issues.

Ovens. This appliance is the number one culprit. While grease fires on the stovetop are common, many issues can also cause an oven fire. While the oven helps contain flames if a fire starts, it can still spread to other parts of the home. Being aware of the common causes of oven fires can help you avoid this situation.

Sometimes it's the appliance itself that's to blame for a fire. Electric ovens have heating elements that can malfunction and cause sparks, which can lead to a fire. So, keeping your oven in good repair is a must. But typically, it’s user error, like when an overfilled pan bubbles over and lands on the heating element. Baking greasy foods can cause the fat and grease to splatter on the heating elements as well, igniting a fire. It’s always best to cover food and use a baking sheet when possible.

Never leave food unattended. Always set a timer to remind yourself of food you have cooking in the oven. And lastly, clean your over regularly! When food debris builds up enough, it can catch on fire.

Dishwashers. Have you ever opened your dishwasher immediately after it finished cleaning and gotten a face full of steam? That’s because a dishwasher contains heating elements that dry your dishes. These heating elements get wet, heat up, and cool down each time the dishwasher is run. Old or faulty elements can start a fire. So, never start a dishwasher before leaving your house. While it's nice to return home to clean dishes, it's not worth the risk.

Dryers. The most common cause of dryer fires is failure to do a thorough cleaning. Because a lint trap won’t catch every bit of fuzz from clothes, lint can gradually build up and catch fire in the heating element or exhaust duct. Although it looks harmless, lint is made of flammable material. Because the fibers are so fine and short, they are essentially like kindling—lots of dry, easily ignited bits collected into one big clump. To see how fast a lint fire can start; check this link. Preventing dryer fires: Experts say keeping your lint trap clean is just part of the safety cycle.

Microwaves. According to Bob Schiffmann, a 50-year veteran of the microwave industry and president of the International Microwave Power Institute, microwave fires usually start for the same reason that oven, stovetop or grill fires do: “It’s simply due to [the food] overheating.” Food-based fires in a microwave almost always happen because someone overestimated or misentered the cook time.

There are three other ways that dangerous microwave fires can begin:

Many user-related causes of appliance fires are caused by carelessness, distraction or haste. And sometimes it’s just ignorance. With appliances, we too often take the “set it and forget it” attitude. And that’s a mistake. “Most people do not follow the recommended installation, use, and care of their appliances,” says Ken Canziani, IAAI-CFI, senior fire investigator at Unified Investigations & Sciences, Inc. in Sacramento, CA. “Many issues or fires can be prevented if people are aware of and follow the manufacturer’s recommended guidelines.”

But unforeseen occurrences befall us all. In other words, stuff happens. If you’ve been unfortunate enough to experience a fire of any kind, give the professionals at Cyclone Kleen Up a call. We’ll clean and restore your central Colorado home and its contents and help return your life back to normal.