Home >> About Us >> Blog >> Powerful Storms are Here to Stay

Powerful Storms are Here to Stay 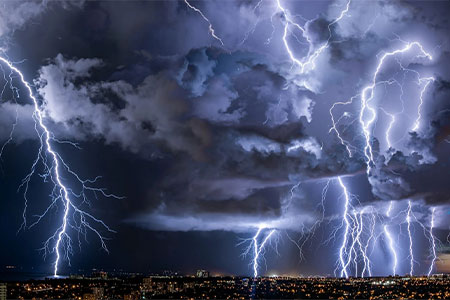 Does it seem to you that Colorado storms are becoming both more frequent and more violent? Well, they are. Actually, there has been a staggering rise in the number of extreme weather events worldwide over the past 20 years, driven largely by rising global temperatures and other climatic changes.

The UN Office for Disaster Risk Reduction (UNDRR) has published a report showing that from 2000 to 2019, there were 7,348 major natural disasters around the world, killing 1.23 million people and resulting in $2.97 trillion in global economic losses. By comparison, the previous 20-year period, 1980-1999, had 4,212 natural disasters, claiming 1.19 million lives and causing $1.63 trillion in economic losses.

A recent U.S. government report shows the devastating effects of climate change. The U.S. Global Change Research Program, a team of 13 federal agencies, was put together with the help of 300 leading scientists. It found that if greenhouse emissions aren’t reduced, the annual average global temperature could increase 9 degrees Fahrenheit or more by the end of this century. This will cause more occurrences of fires and flooding.

In areas with forests, the report anticipates that wildfire seasons could burn up to six times more land annually by 2050, damaging buildings in those regions. On the coasts, facilities and infrastructure are threatened by rising sea levels, flooding, and storm surges, which will affect $1 trillion of real estate. Sea levels have already gone up 7 to 8 inches since 1900, with almost half that rise occurring since 1993.

On top of that, a recent study published in the journal Science made known that the frequency of large-scale tornado outbreaks (events lasting one to three days, featuring several thunderstorms along with six or more tornadoes in close succession) have been increasing in the U.S., almost doubling in the last half century.

Why You Should Plan a Course of Action

"These are all things we should expect to see more and more of as climate change takes a deeper hold on our climate and on the extremities that it creates in our weather,"Jeff Schlegelmilch, director of the National Center for Disaster Preparedness at Columbia University, told weather.com in a recent interview.

We don’t provide this information to scare you. These are realities of the times we live in. They’re also an important part of the challenges that many in Colorado will face in coming years as we’re forced to prepare for more instances of fires, flooding and wind damage.

Where to Go for Help

Acting swiftly is crucial as this will lessen damage, limit further loss and reduce restoration costs. Know ahead of time who to call for help if storm damage occurs. As a locally owned and operated business, Cyclone Kleen Up is nearby and ready to respond 24/7 to your fire, flooding or storm damage emergency. We specialize in both residential and commercial restoration, the cornerstone of our business. Our highly trained crews have the specialized equipment and resources to handle the job and get your home back to normal quickly or effectively help minimize business interruption.