Home >> About Us >> Blog >> Terrible Odors? A Complex Deodorizer May be Needed

Terrible Odors? A Complex Deodorizer May be Needed 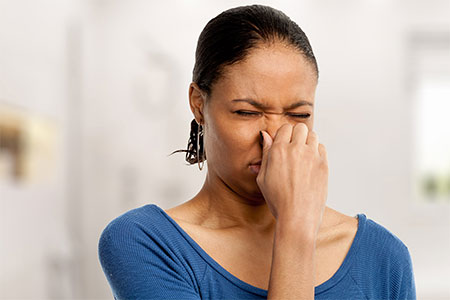 The fresh air that washes down the Rocky Mountains is a Colorado source of pride and wonder. Unfortunately, many of us spend most of our time indoors. And sometimes inside air is not nearly as fresh smelling due to unpleasant odors. So what’s the best way to handle them?

There are times when air fresheners and deodorizers will cover odors adequately. But sometimes you’ve got to pull out the big guns. That’s why it’s a good idea to always have an odor neutralizer on hand. They’re formulated with neutralizing agents that create a bond with various molecules, including the strong odors associated with sulfur (e.g., skunk) and nitrogen (e.g., nicotine and rotten seafood).

Try this simple test: pour a cup of household ammonia (nitrogen) or buy some “liquid skunk” (sulfur) at a hunting supply store. Then take another cup and mix odor neutralizer as directed. Submerge a cotton swab in the ammonia, remove it and smell it. Once you’ve picked yourself off of the floor, dip it into the odor neutralizer and you’ll find that the ammonia smell has disappeared. This is because the neutralizer forms a complex with the nitrogen that is part of the ammonia molecule. Once this complex is formed, the new molecule is no longer perceived by the brain as it moves through your nose, thus no bad odor. This demonstration shows what a big difference there is between masking (or just covering up) odors and neutralizing (destroying) them.

Most odor neutralizers can be used alone or added to a water-based deodorizer as a booster. If the neutralizer you use is a concentrate, be careful not to add too much to a deodorizer as you’ll likely get a residue that will need to be wiped down afterwards.

When Cyclone Kleen Up needs to remove odors from large areas, we apply neutralizers by using a ULV (Ultra Low Volume) fogger. As it’s being dispersed, we mist the product through air ducts as well. We also cover any water sensitive furniture or remove it from the area being treated. Additionally, we always wear a respirator when using a ULV fogger as the micron sized particles emitted from it could cause coughing and choking. Because of this, once we’re finished, we block off and leave the area for about two hours to allow the mist to settle.

Odor neutralizers will help on even the worst odor problems jobs: those caused by skunks, tobacco, spoiled seafood, protein fires, etc. But before you attempt to clean any area, always remember the first rule of deodorization: remove the source of the odor first! Afterwards, thoroughly scrub the area of all contamination before applying any deodorizer. Otherwise, those odors may come back to haunt you.