Home >> About Us >> Blog >> Tobacco Smoke Odor Hazards and Removal 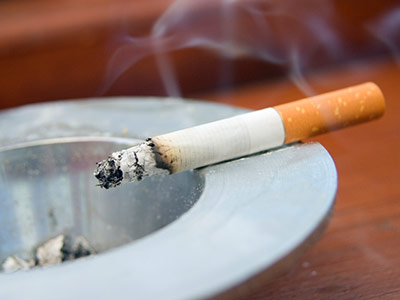 Have you ever rented or bought a home in Colorado that had been completely refurbished yet you could sometimes still smell cigarette smoke? That’s because after years of smoking, even the structural elements of a house can be permeated with tobacco odor, leaving unpleasant smells in all rooms, not just the one where someone has smoked.

What Is Tobacco Smoke?

Cigarette smoke residue is a yellowish-brown, gluey substance that sticks to every surface in a home, making it tough and time-consuming to remove. If you’ve ever cleaned walls or windows that have been subjected to cigarette smoke, you’ve easily seen this residue.

According to the American Lung Association, cigarettes contain over 7,000 chemicals (40 of which are associated with cancer) that not even the strongest air purifiers can remove from your home. But it’s not just an odor problem.

How Does Tobacco Smoke Affect Your Home?

Studies conducted by the San Diego State University indicate that third-hand smoke from walls, carpets and curtains can have a significant impact on a person’s health. Toxic and volatile compounds from cigarettes build up in drywall and in soft furnishings. Children, in particular, are at risk of disease caused by exposure to the toxins from third-hand smoke.

“There’s a big illusion that when tobacco smoke disappears, we’re safe,” said SDSU psychology professor Georg Matt, director of the resource center. “Unfortunately, some of the most toxic compounds clinch to surfaces. They get embedded in carpets, they coat walls, they penetrate into walls. They become part of the indoor environment.”

Smoking not only affects the people exposed to smoke, but it also produces odorous substances that stick to every surface of the area where smoking has taken place. The yellowish-brown substance eliminated through smoking bonds to walls, furniture, and plastics, and can permanently change their appearance. Cigarette smoke also penetrates more odor-absorbing objects, such as insulation, carpets, upholstery, bedding, clothes, and many more.

Additionally, a buildings HVAC system carries smoke odor and chemicals throughout the structure. That means that the buildup of dust and debris inside the ducting that absorbed those odors needs to be removed and the entire ducting system will need to be thoroughly cleaned and sanitized.

There is no magic formula that will remove these residues and smells.

Masking odors with air fresheners only works temporarily and may pose health risks. Moreover, covering up tobacco smell with a fresh coat of paint without cleaning or using a primer first won’t effectively eliminate the odor. Within a short period of time, smoke residue will begin leaking through the paint and spread offensive odors through the room, just like before.

The only effective way to remove tobacco residue and smell is through very thorough cleaning and then sealing all structural surfaces. Cyclone Kleen Up, your Colorado restoration specialists, start tobacco smoke removal by cleaning all surfaces, using deodorizing agents to help eliminate the very tiny particles of tobacco smoke. Once we finish cleaning the visible surfaces, we use specialized equipment, such as hydroxyl generators or ozone generators, that destroy the odor molecules that are inaccessible (such as inside walls or joints).

The next step consists of sealing the surfaces with a sealant to lock in the very last of the stains and odors. Finally, the surfaces will be ready to paint, refinish or apply new coverings. Finally, our team works to ensure all surfaces are sanitized and treated to ensure odors stay away from any and all items you own.

Cyclone Kleen Up are professionals at removing smoke residue and odors, whatever their source. Don’t suffer from being haunted by unwanted smells and stains. Let us give your home a breath of fresh air!