The 3 Signs of Broken Pipes 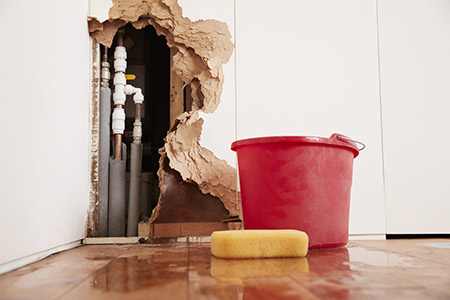 Sometimes a plumbing problem is obvious; like when it’s raining from the ceiling - and you’re on the bottom floor. Or when a small river begins to seep under your bathroom door. But at other times, broken or damaged pipes aren’t quite so obvious. But they can still let you know they exist if you pay attention to the clues. By doing so, you can address the problem more quickly and avoid the damage and expensive repairs that come along with water damage. So, here are three warning signs to watch out for in your Central Colorado home:

Do you ever hear whistling in your home? You’re not doing it, nobody else in the house is doing it and strange dogs are showing up at your door? Well, whistling or whining also occurs when pipes get dented. It’s caused when water is no longer able to flow freely through a pipe. This increases water pressure and may cause a pipe to burst.

The sound can also be the sign of a worn out pressure-reducing valve. Without being replaced, it could lead to burst pipes, overflow, and other issues over time.

Another indication of a broken pipe are unusual or unpleasant odors. A common issue is with the p-trap. The p-trap is the U-shaped pipe that holds a small amount of water that forms a preventative seal against sewer gases coming up from your toilet or sink and into your home. If a crack causes that water to leak out of the p-trap, then you’ll have the odor of sewage in your home.

Also, when pipes become broken or backed up, sewage can’t exit the plumbing system properly. It’s important to deal with these problems quickly as sewage poses a significant health risk to your family and pets.

Are you blaming little puddles in your home on your kids or pets? That could be one answer. But if they continue to show up, especially in the same place, then that could be an indication of broken or damaged plumbing.

Another unusual (and scary) sight that may indicate a broken pipe is a curiously high water bill. High usage could be caused by leaky toilets or faucets. Another cause may be that one of the underground pipes feeding water from your meter to your home may have a crack or loose joint. This can be caused by pipe age, seismic activity, tree roots, or animal activity.

Broken pipes aren’t uncommon in Colorado and can usually be quickly and easily handled by a professional. But don’t put if off. The longer you wait, the more damage will be done and the more expensive it’ll be to fix. If you suspect you have broken pipes in your home, contact the experts at Cyclone Kleen Up. Not only will we have your plumbing repaired, but we’ll also fix any damage that was caused, bringing your home back to pre-damage condition or better.